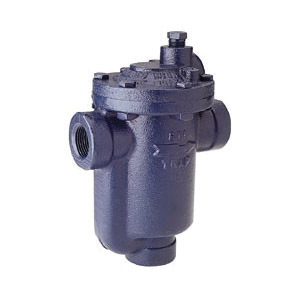 The most reliable steam trap known-the inverted bucket-provides efficient condensate drainage of virtually all types of steam-using equipment. Put the inverted bucket to work in a tough cast iron package, and you have the best of both worlds. Because they operate efficiently for longer periods of time, Armstrong cast iron inverted buckets add solid energy savings to lower replacement/labor costs. All Armstrong cast iron inverted bucket steam traps are repairable for even bigger maintenance savings. A unique leverage system multiplies the force provided by the bucket to open the valve against system pressure. The mechanism is free-floating, and has no fixed pivots to create wear or friction. Because the mechanism is located at the top of the trap, no dirt can collect on the orifice. Small particles of dirt are held in suspension until discharged by the full differential purging action when the bucket sinks, pulling the valve off the seat. The discharge orifice is surrounded by a water seal, preventing live steam loss. Automatic air venting is provided by a small vent hole in the bucket, which provides continuous automatic air and CO2 venting at steam temperature. Inverted bucket traps drain continuously, although discharging intermittently, allowing no condensate backup. They are also resistant to water hammer.